Besides the obviously horrendous crime, this arrest is a big deal because Daskal is the president of Boro Park Shomrim (“Guards”) – the private, Orthodox Jewish, security force that patrols Borough Park. There are other Shomrim groups that patrol Flatbush, Crown Heights and Williamsburg.  They may easily be mistaken for the NYPD, and to many in the Orthodox Jewish enclaves in Brooklyn they effectively are.

Shomrim have a command centers that look like the NYPD’s, down to the slogan of Courtesy, Professionalism, Respect: 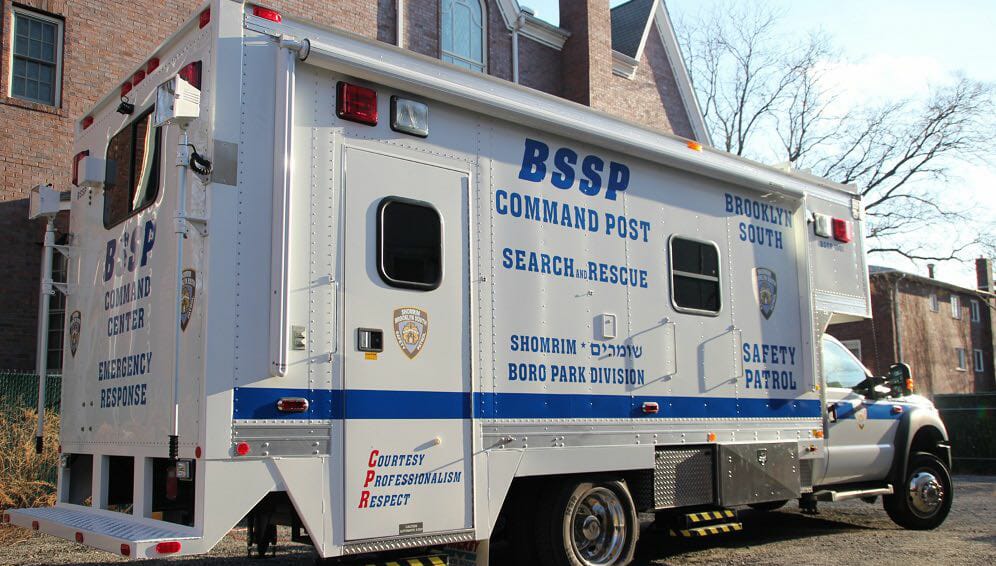 Their shield could easily be mistaken for NYPD at a distance:

Shomrim grew out of a neighborhood watch group known as the “Bakery Boys” in 1990s – young men who delivered bread at night and witnessed lots of car break-ins, but the group has always been controversial. Daskal was a founding member, and has been an intermediary between the NYPD’s 66th Precinct and his Boro Park community ever since.

“Since then, Daskal and the Shomrim have cultivated close ties to the local precinct. A former member of the Shomrim told the Forward in 2016 that Daskal was able to arrange for Orthodox Jews arrested on minor crimes in Boro Park to be released with a ticket ordering them to appear before a judge, rather than being booked through the central system. Daskal denied at the time that he played that role”, Forward wrote on Friday.

“In 2012, Daskal argued against giving police access publicly-funded security cameras installed throughout Boro Park, telling the Forward that it could lead to unwanted police involvement in domestic violence matters. “The camera is very good for the community, but if it’s a private thing,” Daskal told the Forward at the time. “If it’s a public thing it might hurt a person who doesn’t want to arrest her husband for domestic violence.”

These cameras were swiftly installed across Boro Park and Midwood, maintained by a private security company related to Agudath Israel, despite the relatively low crime rates in the area, in the aftermath of the horrific death of eight year old Leiby Kletzky in Kensington. His parents had reported him missing to Shomrim, who failed to call it in to the NYPD for more than three hours, until after the child’s family called 911.

“The Shomrim have helped the police maintain a community that’s mostly free of the shootings in the streets and crimes that usually end up in the media,” Ben Hirsch, a founder of Survivors for Justice, a group that advocates for victims of sexual violence within the Orthodox community told The Village Voice in 2011. “But you do still have some of the terrible social crimes that police would normally be responding to. Instead, within these communities, these crimes are usually reported to Shomrim, and the Shomrim coordinators working together with Orthodox Jewish “community liaisons” cover it up, and it never gets to the cops.”

Such crimes seem to mostly relate to child and domestic abuse. Daskal let it slip in a conversation with the Daily News the aftermath of the Kletzky case that Shomrim kept a list of suspected child molesters that had about 15 people on it that was not shared with the NYPD” because some rabbis oppose civilian police involvement”.

“It’s against Halacha [Jewish law] to go the police without speaking to the rabbis,” Rabbi Joseph Hershkowitz confirmed to the Daily News back in 2011. “We consider Shomrim and Hatzolah [the Jewish ambulance service] family. So you go to family first.”

It seems, however, that this approach results in crimes covered up, or dismissed when brought up for justice.

With crime rates as low as they are, maybe it is time for the NYPD be the only cops in town.

There were a lot of French Post-Punk bands in the 80’s, which means plenty of great live shows…
byConnected With Us

Mint Hill North Carolina Most Reliable Onsite Computer, PC Repairs, Networking, and Voice and Data Cabling Providers. The…
byConnected With Us
No comments